KIVI Offshore Engineering presented the yearly graduation price to the best student graduated in 2017 in an offshore engineering related topic at the Technical University in Delft on 20 September 2018.

The award ceremony took place in advance of a lecture by ir. Edward Heerema FCEng of Allseas, about the achievements of the largest vessel in the world: the "Pioneering Spirit".

The objectives of the graduation award are:

The ceremony highlighted the achievements of the nominated students, and the winner received a cheque of € 1500,-. The price would not be possible without a board of very experienced representatives of the offshore industry and universities. This year the papers were judged by: ir. George Lagers, ir. Hans Cozijn, ir. Martijn Nieuwenhuis and ir. Wim Jolles. A big thanks to these volunteers who spent a lot of time in reviewing and commenting the various works. 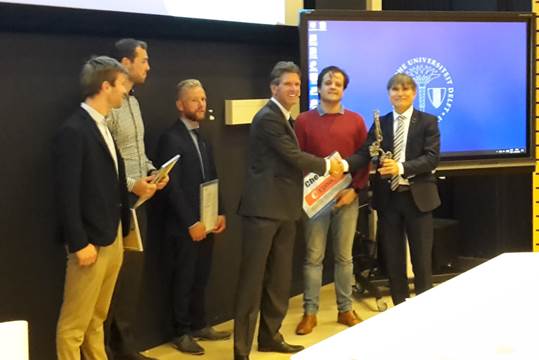 The nominees and their respective graduation professors were:

All the works were judged to be of high level. However Mr. Romer finally won the price for an extensive study in the use of 3D printing of heavy tools for the offshore industry. In particular, a heavy crane hook has been manufactured with this new technology, and subsequently researched on its material qualities among which are strength and fatigue, and the possible anisotropy of the material. The work has been carried out at Huisman Equipment, partly in Schiedam and partly in the Czech Republic. Huisman Equipment is a frontrunner in developing new technology for the offshore industry.

The judge report praised the thesis with following remarks: the objective was clearly written, the study was to the point, the research was done in a systematic way and exceeded what is normally to be expected from a graduation paper. 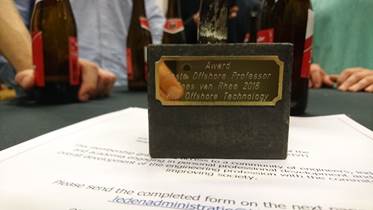 Mr. Romer was the rightful winner of this year’s contest, as was his professor M. Kaminski, who is well known in the offshore and maritime community. Professor Kaminski received the same price, albeit not with a cheque but with a statue which passes on from each winning professor to the next. Professor Kaminski may show the statue on his desk for the coming year.

The Award Ceremony for best Master thesis in Offshore Engineering serves as a challenge and opportunity for the next generation of graduation students to perform a high quality graduation thesis to win the prestigious KIVI Award next year, and of course gain eternal fame not only for him- or herself, but also for the professor. The MSc Award ceremony will be followed by a similar ceremony on Thursday November 15 2018, at the HZ University of Applied Sciences in Vlissingen, for the best student at bachelor level.