An international research team, led by the Observatory of Universität Hamburg has, using LOFAR, discovered four radio sources of up to ten million light years in size: megahalos. Published by the editorial team, 19 October 2022

Seen from a great distance, the universe is not evenly distributed; it actually resembles a net-like structure, somewhat similar to the way neurons are connected to one another in the brain. At the nodes of this so-called cosmic web hundreds, sometimes even thousands of galaxies are crowded together into galaxy clusters. Sometimes, two galaxy clusters collide with each other and merge into a single cluster. In the process, they release enormous amounts of energy, so large that they are the most powerful events happening in our Universe after the Big Bang. During these collisions, tiny, charged particles are accelerated to near-lightspeed, emitting radio waves that can be detected with radio telescopes.

Using the Low Frequency Array (LOFAR), scientists have now discovered four galaxy clusters where a faint radio emission envelopes the entire clusters even reaching their outskirts. Dr. Virginia Cuciti led the international research team: “Megahalos extend up to ten million light years) in size, which means that they cover a volume that is about 30 times larger than the volume of the radio sources known so far in galaxy clusters. This implies that with megahalos we can now observe the peripheral regions of galaxy clusters which were previously almost inaccessible.” 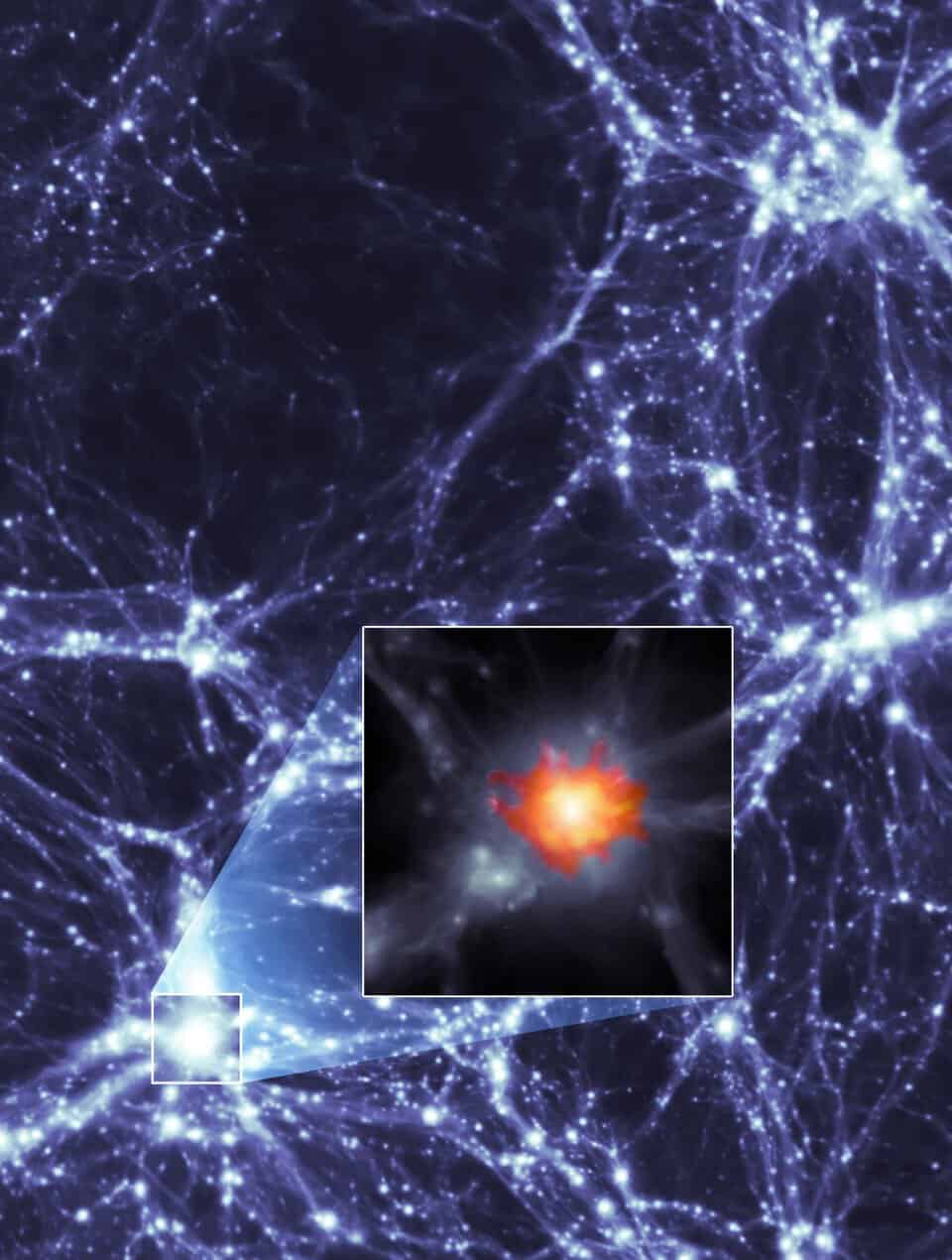 Computer simulation of the large-scale structure of the Universe. The inset shows a zoom into a galaxy cluster where a megahalo is observed (orange emission, from LOFAR observations).

Cuciti’s team used LOFAR Two-metre Sky Survey (LoTSS) observations of these four galaxy clusters. While analysing the data of one of the clusters, she and her teammates saw some significant hints of radio emission on exceptionally large scales, Cuciti says. “So, we decided to re-inspect all the images of a sample of 310 clusters that we were studying with the aim of looking for similar emission. When we discovered that three other clusters of this sample showed emission on similar scales and with similar characteristics, it became clear that we discovered a new type of cosmic phenomenon that opens the possibility to explore the external region of galaxy clusters through radio observations.”

This discovery could not have been made without LOFAR, Cuciti says. “It is not by chance that megahalos have been discovered with LOFAR. They are very large, and their emission is very faint. Moreover, the synchrotron spectrum of megahalos is steep, which basically means that they are brighter at low radio frequency, therefore a sensitive radio telescope operating at low radio frequency, such as LOFAR, is the ideal instrument to detect them.”

But even then, it was not easy, co-author and astronomer at ASTRON Timothy Shimwell says: “Even in the very sensitive and wide area LOFAR surveys dataset these objects were very hard to find because they are so faint and a very careful analysis of large quantities of data was required to identify them.” 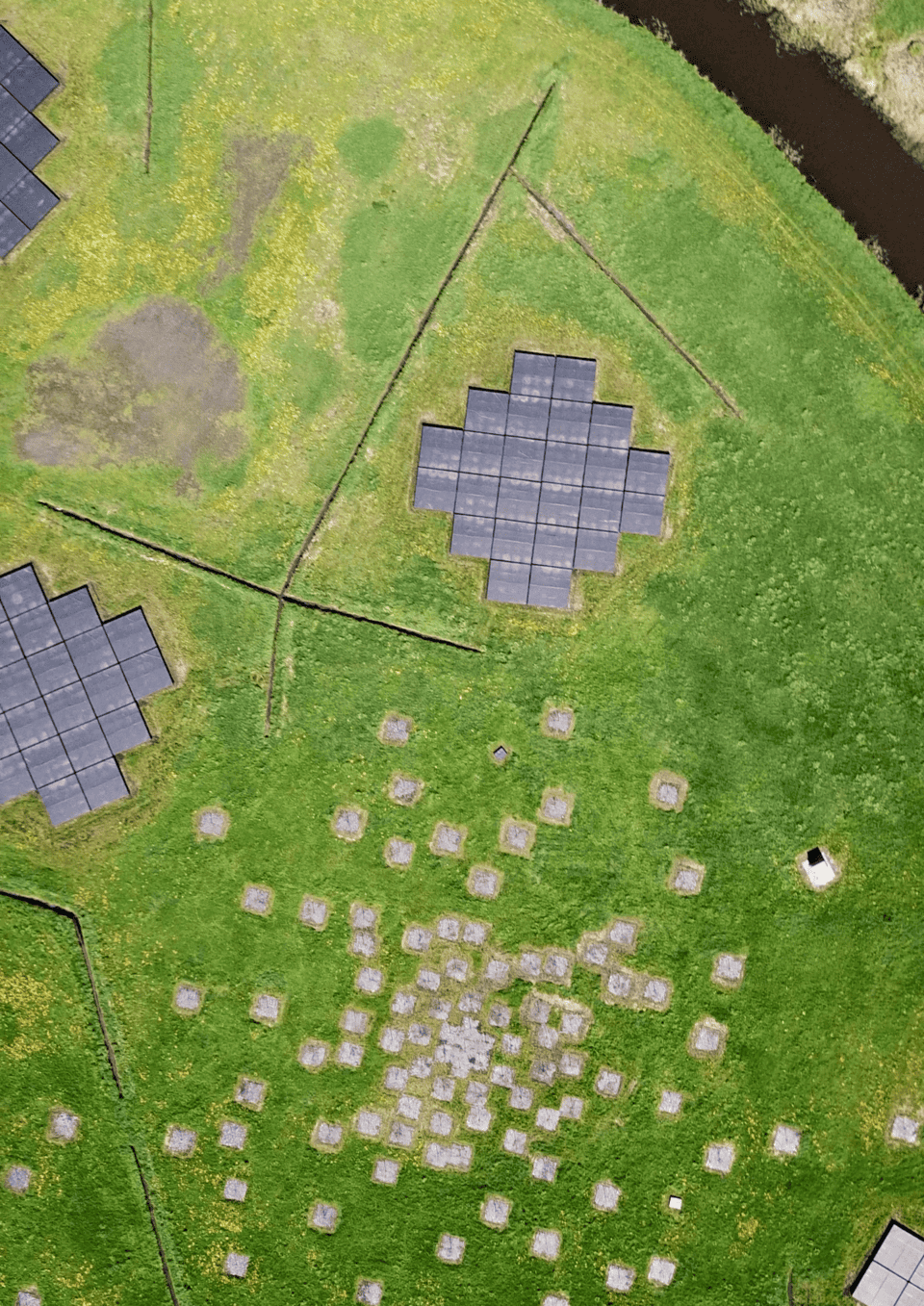 A region of the LOFAR core seen from above. The two antenna types of LOFAR are visible.

With LOFAR currently undergoing an upgrade to LOFAR2.0, making it an even more sensitive instrument, even more valuable information can be found about megahalos. Cuciti: “With more sensitive observations we could be able to detect megahalos in a much larger number of clusters. This is actually one of the most interesting aspects of this work, because it means that, if megahalos are present in a large fraction of clusters, if not all of them, we are opening a new field of research, a new way to systematically explore the periphery of galaxy clusters with radio observations. The LOFAR 2.0 upgrade will increase the sensitivity of LOFAR, especially in the LBA (at 50 MHz), and will therefore allow us to answer to the question: how many clusters host megahalos?"

The Nature-article Galaxy clusters enveloped by vast volumes of relativistic electrons can be found here.